The German front lines were making frighteningly powerful progress in the Alsace region of France, and American troops were picked from every defensive position along the Rhine River and thrown in the way of their advances. The 70th Infantry Division, in which Frank belonged, was now a unit of the entire American Seventh Army fighting in France. On 3 January 1945, Frank's company was ordered from the Rhine River as a part of Col. Landstrom's 3rd (Blue) Battalion to La Petite-Pierre to await further orders. Before they could advance, the 1st (Red) and 2nd (White) Battalions of the 274th were split off and quickly scuttled to the German advances at Philippsbourg and Wingen. As Frank's reserve was getting underway to La Petite-Pierre for their orders, instructions were sent for them to change course to Soufflenheim by motor march where they would join the 45th Division and march through the Schneitzwald Forest near Rohrbach. Defenses were weak here and even though they were heading into a nearly impenetrable forest, the Germans were more than willing to take advantage of this weakly protected area to break through the Allied lines. 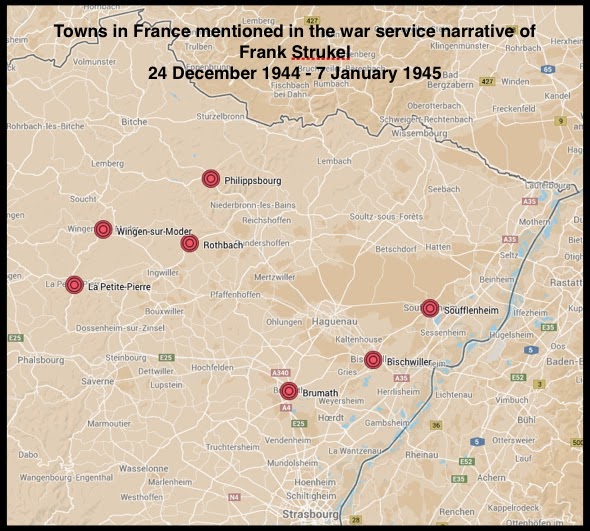 Through howling winds and subzero temperatures, Frank and his comrades marched into the forest. It may have struck him oddly how such a dense, beautiful expanse of mountainside, normally quiet but for the sound of the winds through the trees could now become a cacophony of artillery fire, shells screaming through the air, noisy tanks trudging through mountain roads, booming mortars exploding ahead, and P-47s roaring over the treetops.

By the afternoon of 4 January 1945 the men had reached their bivouac area. Nobody was sure how close the German 12th Mountain SS Regiment was in the thickness of the woods, but their gunfire could be heard loudly and distinctly. They were close. As night fell the men tried as best they could to ward off the cold by rolling up in their blankets on the snow. The mess trucks that finally made it to the encampment site served scrambled eggs and mush at midnight - frozen. Two more inches of snow fell through the night, burying those soldiers who could sleep in a camouflaged veil of white.

On the morning of 5 January 1945, instructions were received for the battalion to move into the hills north of Rothbach and prepare defensive positions. Frank and the rest of Company L were charged with leading the way into the new area. As the town fell behind them, the route became steep and slippery, and the tree line so dense that a man could lose sight of the platoon if he fell a few feet behind. Forward progress was slow through snow drifts, and much of it was done sliding, stumbling, crawling, and fighting to reach the summit of each subsequent hill. The dense forest made all the soldiers fearful of ambush behind every tree.

At the rise of the next large hill, German gunfire greeted the first man over the rise. Return fire sent the German soldiers scampering into the hidden cover of the dense woodland. The men move forward now by creeping slowly from tree to tree. The battalion discovered a cave in a gorge between two hills - a great place for German soldiers to seek cover. A rifle grenade launched into the cave produced three German soldiers waving white handkerchiefs and screaming "Kamerad!" The company had taken its first prisoners. The elation of the company over this momentary triumph was short lived. Orders were received to leave the gorge immediately and climb back up the last hill they just crossed and hold their higher position all night. The soldiers had left their blankets at the company command post and had only worn enough clothes to move unhindered. They were not prepared for a frozen night on the mountainside.

Pfc. Smith who was in Company L with Frank Strukel reported, "The rest of us started back up that hill. Wind cut us like a knife all the way up. My face burned, and my hands felt like they were about to drop off. God, it was cold!" The frigid conditions became so unbearable that some of the soldiers went back down into the valley to find dead German soldiers and confiscate their outer garments. Other soldiers removed the gas protective covers from their gas masks and slipped them over their bodies to keep the wind out. Any foxholes dug in the snow for protection were done with the single shovel in the company's possession, passed from one soldier to the next. When supplies and the mess trucks finally arrived, it was discovered that the Germans had stolen Frank's and all of Company L's blankets and mess gear. Hot chow was served, but it took several hours for the men to eat, as the single cup they had found was passed from one man to another as the only eating utensil. The men settled in for the long, bitterly cold night.

Those who could sleep did so only briefly. At midnight the two platoons were ordered to a new position - they had encamped in the wrong area! They were too far advanced. The men were quietly led to a new position at the foot of a forward slope. Morning was approaching. Sleep was a luxury that would not be had that night. The soldiers huddled together around the trees and waited for daybreak.

The day of 6 January 1945 was spent moving battalions into defensive positions. Orders were received to defend the high ground abreast of the mountain pass at Rothbach. Frank and the rest of Company L were to cover the high ground on the northwest of the pass, while Company I took the southeast. Company K was sent to Offweiler as battalion reserve. Company M set up protective lines on the hilly, difficult terrain that they had covered from Rothbach. The troops were in place and ready for the advancing German army. Man-to-man combat was encountered throughout the day in the forest. German soldiers peppered the landscape in small isolated groups. But the bulk of the German army was moving toward them. The worst was yet to come.