Sins of the Father, Part I 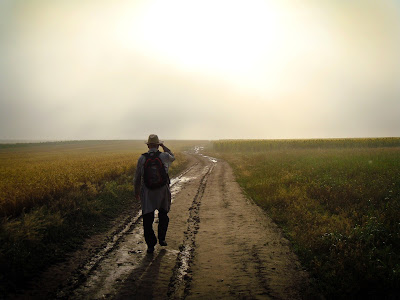 Note to Readers: This is a narrative. To start at the beginning, click on the "Blog Archive" to the right and click on the earliest entry, which is the first written, on 18 February 2014. Or simply click here:  Hoosier Daddy?: Beginnings. For those who have read the blog up to this point have accompanied me on my journey of discovery. We will now explore the life of the man I discovered, the meeting of father and daughter, and the ramifications thereof.

"When positive masculine energy is not modeled from father to son, it creates a vacuum in the souls of men, and into that vacuum demons pour."   -- Richard Rohr

James Daugherty, a middling prosperous landowner and businessman in post-Revolutionary War Rockbridge County, Virginia, was experiencing his mid-life crisis. The last of his children were leaving home, marrying, and starting lives of their own. Unable to waste his money on a crimson red sports car and take up recreational drug use, he did the next best thing a man his position can do in the mid-1790s. He ran off with his housekeeper.

Having "went off with an idle woman of the name [Lucretia] Vanscoit to the County of Wythe where he had a valuable plantation", James Daugherty had resettled nearly 120 miles away down the Shenandoah Valley and left his wife Hannah with no means of support. Hannah Daugherty may have soon believed that her husband got what was coming to him. Shortly after his departure, he was "found dead, and died by a visit of God in a natural way" in 1799.

Hannah Daugherty took up residence in the household of her son, David Daugherty. It may have pained her to see her son follow in his father's footsteps. In 1815, David's wife Ruth filed for divorce. Her husband had for some time past been involved with a married woman, Betsey Carson. Betsey's husband, Martin, testified before the Rockbridge County, Virginia, Chancery Court that his wife told him "that the said David Daugherty had informed her that he intended to poison his wife that he might have the better opportunity of connecting himself with the said Betsey, and she acknowledged that he was the father of two of her children." Like his father James, David abandoned his wife into the care of his son and moved 175 miles down the valley, with no judgment made on his divorce.

Thomas Daugherty, another son of James Daugherty, may not have been as outwardly cruel to his spouse as his father and brother appeared to be, but then again, he rarely had time to tire of a wife. Repeatedly widowed, he married in 1791, 1800, 1811, and 1827. He left Virginia immediately after his marriage to his third wife, and headed for the wilds of southwest Ohio, an area having only been settled within the previous decade. Perhaps he had an adventurous spirit. More likely, he conveniently escaped prosecution for fraud in a complex legal case in which he was accused of marrying his second wife only to procure land, of which clear title was in question. His absence caused the case to cease without judgment.

Immediately upon settling in Ohio, Thomas Daugherty joined a regiment to fight in the War of 1812, and supposedly saw battle on Lake Erie. A thrilling adventure for a young man in his 20s, but Thomas was in his mid-40s and recently settled in an untamed wilderness. He may have experienced an adventure of a lifetime, but he left behind a new bride two decades his junior to care for a slew of children and step-children. Upon her death in 1825, many of his younger children were distributed into other families to raise. Although Thomas lived well into his 80s and fathered ten or more children, statements taken after his death in 1852 indicate none of his children showed interest in visiting him, even though some of them lived neaby. Ephraim Daugherty cared for his father, Thomas, only upon agreement that he would gain sole possession of military bounty land in Indiana upon his father's death.

Another of Thomas Daugherty's son, Daniel Daugherty, was a shrewd and cunning business man. Much like his grandfather James Daugherty, he invested in property. Not content to live the mundane  agricultural life of his peers, he invested in small businesses in his adopted home town of Jeffersonville, Ohio, that had only been laid out in 1831. He started a wholesale drygoods business and local store with backing from prominent figures in Fayette County, Ohio, political circles. Married in 1824, and already with a household full of children, his businesses failed in the Panic of 1837. Dozens of law suits followed. Banks and creditors demanded money from him that he did not have. He unsuccessfully sued those who owed him money. Business partners were angered by the debt he had accrued in their name, and even angrier when he failed to appear in court to answer their questions. Although Daugherty men in previous generations had run away from domestic problems, the solution was the same for financial ones as well.

Daniel Daugherty's whereabouts for nearly a decade thereafter are unknown. He was crafiter than the generations before him, having effectively disappeared, evading those seeking him for unpaid debts. He reappeared in Mercer and Rock Island Counties, Illinois, shortly before his remarriage in 1849 to a wealthy widow from a prominent local family, his first wife apparently dead. Within months of marrying his second wife, he inserted himself aggressively into business dealings of his new wife's family. Reminiscent of accusations leveled against his father in Virginia decades before, documents uncovered in Illinois, Iowa, and Minnesota accused Daniel of marrying for money and social leverage. Daniel maintained business contacts along a 300-mile stretch of the Mississippi River, all the while depositing children from his first wife amongst families in a tri-state area, relieving himself of the need to care for them.

In 1853, Daniel Daugherty removed to the fledgling town of Homer, Minnesota, on the Mississippi River. Willard Bunnell, the first white settler of the area, had plans for the town he created on the western bank of the river, initially dubbed Bunell's Landing. Although Willard had built a hotel and other buildings in his fledgling town, "he did not have the aptitute, patience, or the tact necessary to successfully organize and develop a town site." One of his oversights was filing a claim to the property he had developed. When the federal land office opened in Winona in 1854, Daniel Daugherty unscrupulously claimed all of Willard Bunnell's land. None too pleased, Bunnell angrily confronted Daniel Daugherty, and in the ensuing "fight Daugherty seized Bunnell's thumb in a vise-like grip and held on until Bunnell surrendered. Bunnell lost not only the fight, but also his thumb, which was so mutilated, it had to be amputated."

Daniel Daugherty followed members of his wife's family to Poweshiek County, Iowa, by 1865, where he purchased a modest 80-acre farm. When he was widowed again in 1873, it took him less than a year to marry another well-to-do widow, Galetsy (Gowen) Wright. The couple removed to the nearby town of Belle Plaine, Iowa, but the marriage lasted only two years. This time a Daugherty wife took a stand, and left her husband after "diverse unhappy disputes and differences" and the two "agreed to live separate and apart from each other during their natural life." Galetsy made sure she maintained sole rights and custody of the real estate and property she brought into the marriage.

When Daniel Daugherty penned his last will and testament in February 1880, he had only nine more months of life left in him. He left bequests to six children by his first wife that he had little part in raising, some of them unknowingly already dead.

From James to Thomas to Daniel, the legacy of Daugherty fathers was one of abandonment, deception, violence, and selfishness. The ensuing three generations of Daugherty men only magnified and built upon an already deeply ingrained and established theme.

The grand finale would end with a daughter.